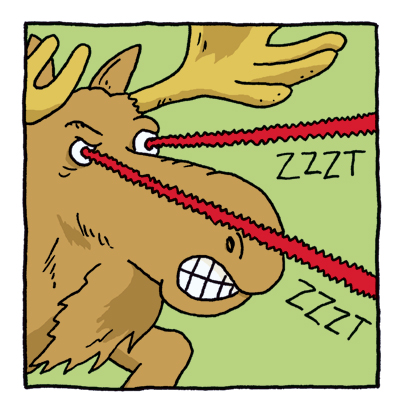 Despite a lifelong fascination with moose, I had never really drawn them that often – until this past year. When it came time to draw Laser Moose and Rabbit Boy, I needed to moose like I’d never moosed before.

One thing about drawing Laser Moose is that he does things that moose don’t do in real life. Like leaping through the air sideways and shooting lasers out of his eyes. So I started looking at moose videos on YouTube and pausing them so I could see what moose looked like when they were jumping and attacking. And I examined pictures of moose skeletons and musculature, so I could see how they were put together. This way, I could make Laser Moose do things that moose don’t normally do, but still make his actions look physically possible.

The tricky part about drawing moose is the antlers. Antlers are complicated, and you really need a physical model for them, because they look completely different when you look at them from different angles. So I used some moose figurines to help see the antlers from different perspectives – the one shown here is my favorite, from a series of models by Schleich.

I always like to boil things down into the smallest number of lines I can, without losing the essence of the thing I’m drawing. So I started with more detailed moose, and gradually simplified them down to my final moose-drawing style.

The eyebrows were an important discovery – I started without them, but when I added them, Laser Moose gained a wide range of possible expressions and the character really began to come to life for me.

Laser Moose and Rabbit Boy comes out on Sept 6, 2016, but is available for preorder now!